What are neutrophils and what do they do?

What are neutrophils and what do they do?

Neutrophils are a type of white blood cell that helps heal damaged tissues and resolve infections. Neutrophil blood levels increase naturally in response to infections, injuries, and other types of stress. They may decrease in response to severe or chronic infections, drug treatments, and genetic conditions. 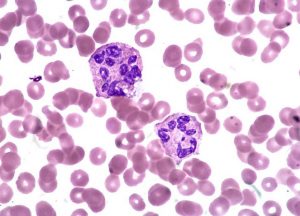 Neutrophils help prevent infections by blocking, disabling, digesting, or warding off invading particles and microorganisms. They also communicate with other cells to help them repair cells and mount a proper immune response.

When there is an infection or another source of inflammation in the body, special chemicals alert mature neutrophils, which then leave the bone marrow and travel through the bloodstream to the site in need. Unlike some other cells or blood components, neutrophils can travel through junctions in the cells that line blood vessel walls and enter into tissues directly.

Causes of high or low levels

There are many different reasons why a person may have higher or lower than normal levels of neutrophils in their blood.

Neutrophils are a type of white blood cell.

Rises in neutrophil levels usually occur naturally due to infections or injuries. However, neutrophil blood levels may also increase in response to:

An abnormally low blood level of neutrophils is a condition called neutropenia. A drop in neutrophil blood levels typically occurs when the body uses immune cells faster than it produces them or the bone marrow is not producing them correctly.

An enlarged spleen may also cause a decrease in neutrophil levels because the spleen traps and destroys neutrophils and other blood cells.

Some conditions and procedures that cause the body to use neutrophils too quickly include:

Some specific conditions, procedures, and drugs that interfere with neutrophil production include:

A laboratory specialist can evaluate a blood sample for white blood cell levels.

A doctor may order a CBC test when someone is experiencing a range of symptoms related to infection, chronic illness, and injury, such as fever, pain, and exhaustion. A nurse or technician will draw a small amount of blood from the arm and send it off for evaluation.

If the initial test shows a higher or lower number of white blood cells than normal, the doctor will likely repeat the test to confirm the results. If the initial results are confirmed, a doctor will perform a physical exam, ask questions about the person’s lifestyle, and review their medical history.

If there is no apparent reason for changes in white blood cell levels, the doctor will order a more specific test. Laboratory specialists will look for specific white blood cells, such as immature neutrophils called myeloblasts. During an infection or chronic illness, these cells emerge from the bone marrow and mature in the blood instead of the bone marrow. If myeloblasts or other white blood cells appear in significant levels in the blood, the doctor will request a bone marrow sample. Bone marrow collection involves inserting a long needle into part of the pelvis near the back of your hip. The procedure can be very painful, and a doctor will typically take the sample in a hospital setting with at least a local anesthetic. Experts will examine the bone marrow sample to see if neutrophils and other blood cells are developing correctly and are in regular supply.

The amount and proportion of white blood cells in the bloodstream change over time with age and other events, such as pregnancy. While everyone’s normal range is slightly different, some commonly used ranges include:

Minor changes in neutrophil or white blood cell levels are typically nothing to worry about as long as they are temporary. A raised white blood cell count often means the body is responding to infection, injury, or stress. Some people have naturally lower levels of white blood cells and neutrophils than other people due to a range of factors, including congenital conditions.

If neutrophil or white blood cell levels are significantly altered for no apparent reason or remain raised or lowered, a doctor will order more tests to determine the cause. Severely high or low levels of white blood cells often require emergency care and monitoring. People with severe neutropenia will have an inadequate defense against infection. People with severe neutrophilia typically have a life-threatening type of infection or other inflammatory illness that requires treatment, such as cancer.

How to raise and lower levels

Nutritional yeast is a plant-based source of vitamin B-12.

The best way to correct abnormal neutrophil levels is to address and treat the underlying cause.

Antibiotics can treat bacterial infections, while antifungal medicine treats fungal infections. People can treat certain viral infections with medications that slow viral activity. Otherwise, supportive therapies, such as fluids and rest, may be part of the treatment plan.

To help reduce the risk of high or low neutrophil levels, people may want to try the following tips:

However, people with only minor or mild changes in their neutrophil blood levels often show no symptoms and do not require any treatment.

Having a healthy number of neutrophils in the blood and bone marrow is crucial to the correct working of the immune system.

When neutrophil levels are higher or lower than usual for more than a short period, a doctor will order several tests to work out the underlying cause. People with significantly altered neutrophil levels may also require hospitalization to prevent infection and treat life-threatening conditions.

Neutrophilia, when neutrophil levels that are higher than usual are often related to:

Neutropenia, where neutrophil levels are lower than usual are often related to:

It is a good idea to have regular wellness checks at a doctor’s office to stay on top of health. Anyone with concerns about their neutrophil count or any medical condition should talk to their doctor who will be able to answer questions they may have.