Some studies indicate that being overweight increases the risk of several types of cancer, particularly in the breast, endometrium, colon, esophagus, kidney, pancreas and gallbladder, and possibly other types of cancer as well. Although the connection is not well understood, it may be that excess fat in the body causes increased hormone production, chronic inflammation, or poor regulation of tumor cell growth which, in turn, promote the development of different types of cancer. 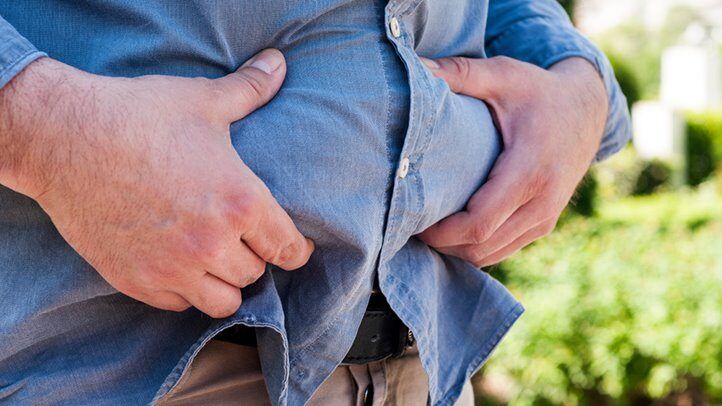 If and how excess weight affects cancer risk and cancer recurrence may depend on many factors, including your sex, when you gain the weight, and the type of cancer involved. For instance, weight gain is associated with breast, endometrial and ovarian cancer in postmenopausal women, colon cancer in men, and kidney cancer in all adults.

If you’re overweight, losing weight may reduce your risk of cancer and recurrence, and will certainly improve your health in other ways, but the most promising benefits come from avoiding excess weight gain in the first place.

Can excess weight fuel the growth of cancer?

Obesity affects hormone levels and inflammation in the body, and can contribute to pre-cancerous conditions like fatty liver disease.

It’s pretty obvious that carrying around extra weight can make you feel sluggish, affect your self-esteem, and put you at increased risk for heart disease and diabetes. But increasingly, researchers are also making connections between obesity and cancer—several different types of cancer, in fact. Many cases of cancer occur because of genetic traits, or purely because of chance. But for others, obesity can be a big contributing factor. How does obesity encourage cancer growth?

High-levels of long-term inflammation—the immune system’s response to injury, illness, or other disturbances in the body—has been shown to fuel the growth of cancer cells. Not only can obesity itself trigger inflammation; so can some of the the eating behaviors that lead to weight gain in the first place—like high-sugar and high-fat diets. Having too much fat around the belly, regardless of body mass index, increases inflammation in the body, as well.

Some cancers are also linked to sex hormones like estrogen. Women’s bodies produces estrogen in their fat cells, especially after menopause.

Then there’s the way that obesity contributes to insulin resistance—a condition in which the body loses its sensitivity to the hormone and can’t respond normally. This can lead to excess levels of insulin and insulin-related growth hormones in the body, which has been linked to cell proliferation and several types of cancer.

Which cancers are linked to obesity?

Studies have shown that being overweight or obese is clearly linked to an increased risk of several cancers, including uterine (endometrial), colorectal, esophageal, kidney, pancreatic, and, in post-menopausal women, breast cancer. It’s also been associated with an increased risk of liver cancer—a cancer whose rates have tripled in the United States since the 1970s. Obesity is a risk factor for nonalcoholic fatty liver disease, which can progress to liver cirrhosis and, in extreme cases, liver cancer.

Several genes influence a person’s likelihood of developing fatty liver disease, but a recent study in Nature Genetics found that people with high-risk gene variants were much more likely to actually get the disease if they were obese than if they were normal weight.

Studies have found less of a direct association between obesity and other cancers, including gallbladder, cervical, ovarian, and prostate cancer, as well as Non-Hodgkin lymphoma and multiple myeloma—but research does suggest it may play a role in these diseases, too.

How to protect yourself

Maintaining a healthy weight, or losing weight if you need to, can reduce your risk of getting cancer—and from dying from cancer if you do get it. Watching your calories and making healthy food choices may be the most effective way to shave unwanted pounds, but exercise is also crucial—especially for middle-age and older adults. As we age, we lose bone mass and muscle mass, which affects metabolic rate. Exercise can protect muscles and bones, and helps fight inflammation better than dieting alone.