Grilled meat is a big part of summer in the United States. Cookouts and family barbecues serve up hamburgers, hot dogs, steaks, and chicken for the perfect weekend summer meal. For years, there has been controversy over whether grilled red meat and chicken could cause cancer. This subject has been circulated online as being true and false, and there have even been conflicting reports in the news. What do we believe?

Keep reading to learn not just why and when grilled meat may be a problem, but what you can do to reduce the number of carcinogens in the meat you grill—so you can enjoy those summer barbecues without feeling guilty.

Does Grilling or Barbecuing Meat Cause Cancer?

Studies have found that eating grilled meat or chicken may increase your risk of developing cancer.

The problem comes down to carcinogens, cancer-causing substances which may be formed as part of the grilling process. The amino acids, sugars, and creatine in meats react at high temperatures forming heterocyclic amines.

Heterocyclic amines (HAs) are human carcinogens found on any meat cooked at high temperature, whether on a grill or in a pan or under the broiler. Part of the problem is the grilling, but the other is simply the heat. Pan-frying meats at high temperatures (over 300 F) also appears to increase cancer risk.

Meanwhile, polycyclic aromatic hydrocarbons (PAHs) form when the meat juices drip onto the coals or other heating surfaces and flare up in flames and smoke. They stick to meat and are only found on grilled or smoked meat. HAs and PAHs are mutagenic—they cause changes in the DNA of cells in the laboratory that could lead to cells becoming cancerous. The most important factor in PAH production appears to be the incomplete combustion of fats which drip on the grill.

Despite these findings, nobody is officially calling for an end to grilling. There aren’t any federal guidelines telling you what levels of HCAs and PAHs will harm you. (If you believe that a risk of cancer would mean that grilling would be banned, keep in mind that cigarettes are legal.)

While most studies have focused on grilled meat and the incidence of cancer, a 2017 study found that women with breast cancer had lower survival rates if they consumed greater amounts of grilled, barbecued, or smoked meats. 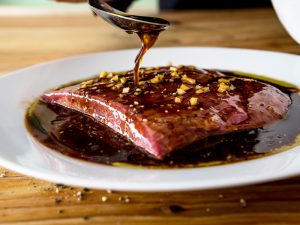 Before canceling your barbecue and wallowing in sadness for a summer memory lost, there are several things you can do to reduce the carcinogens in barbecued meats—often substantially. Some of these include:

The answer is no. What we’ve learned about grilled meat doesn’t pertain to grilled vegetables. Vegetables don’t contain creatine, the protein which can be turned into heterocyclic amines, and do not have the juices meats do which can drip onto coals.

So add all of the potatoes, red, yellow, orange, and green peppers, zucchini, onions (rich in quercetin), mushrooms, and any other vegetables you enjoy, to the grill. You may use a grill basket, or whatever method you prefer. In fact, many people who don’t particularly enjoy vegetables alone, savor the taste of marinated and lightly seasoned grilled vegetables.

Don’t forget the spices. Many people forget that the spices we add to our foods can pack a healthy anti-cancer punch. Better yet, grow some fresh basil, thyme, rosemary, and sage in a container on your deck next to your grill. Chop some of these spices to add to your grilled foods.

According to the International Agency on Research of Cancer, it appears to be wise to limit your intake of red meats, whether grilled or cooked in any fashion. You may see recommendations talking about how many ounces you should eat, but unless you weigh all of the food you eat, this isn’t really practical. Instead, there are a few simple rules to follow.

Using skewers is also an excellent way to limit the amount of grilled meat consumed during a meal. Small pieces of meat, combined with fresh fruits and vegetables on the grill make for an attractive and delicious meal. 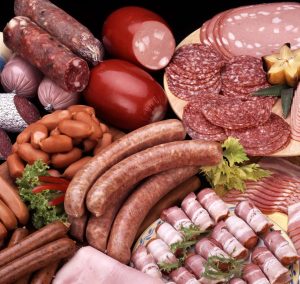 As for the hot dogs, you may want to take a pass. We know that, of all meats, processed meats likely confer the most cancer risk.

Since you will already be limiting both the frequency and portion size of the meats you eat, might it not be best to save those portions for cuts of non-processed meats you can truly savor, such as a good (but marinated) steak?

We know that high cooking temperatures and smoke put mutagenic chemicals into and onto meat. Yet, there are several measures you can take to reduce the number of heterocyclic amines and other carcinogens in the meat you eat.

Keep in mind that just like everything in life, moderation is key. You still can enjoy grilled meats, but just do so in moderation and when cooked at low temperatures. That said, women who have had breast cancer may want to limit the amount of grilled, barbecued, and smoked meats they consume, even if they take the measures above to reduce carcinogens.

Finally, instead of thinking about only what you need to avoid, you may wish to reframe and think about the foods you can enjoy which may instead reduce your risk of cancer.