Cancer Immunotherapy Side Effects: What to know

Cancer Immunotherapy Side Effects: What to know

If you’ve researched cancer treatment options, you’ve probably heard of immunotherapy, which trains the immune system to attack cancer, rather than attacking the cancer directly. You also might have heard that immunotherapy doesn’t have side effects.

But that’s not always the case. With the most common type of immunotherapy — immune checkpoint therapies — about 5-10% of patients experience side effects, and they’re life-threatening in about 1-2% of those cases. Immunotherapy side effects often differ from those commonly seen with other types of cancer treatment. Here’s what patients should know. 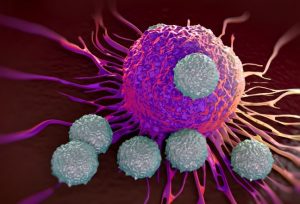 As with many cancer therapies, fatigue tends to be one of the most common, but immunotherapy drugs also can cause inflammation throughout the body. For example, patients may experience skin inflammation as pigment changes, a rash and feeling itchy, sometimes even without a rash. Inflammation in the lungs can cause a cough and chest pains. The colon may also become inflamed, causing abdominal pain and diarrhea.

Other more rare side effects affect the endocrine system, which is how the body produces and regulates hormones. Some patients may develop diabetes, but a more concerning side effect is hypophysitis – inflammation of the pituitary gland. The biggest challenge is that it manifests in so many ways and can only be definitively determined with blood work. The patient may experience fatigue, fever or a headache.

We don’t know for sure which immunotherapy patients are more likely to experience these side effects. But side effects don’t tend to be related to the cancer type, instead, they’re more often tied to the type of immunotherapy drug the patient receives.

When immunotherapy side effects show up varies, but most immunotherapy patients dealing with side effects see them in the first weeks to months of treatment. With proper treatment, the side effects can resolve in one to three weeks. However, since these therapies are still relatively new, we don’t have data on if there are delayed side effects that appear years later.

Side effect management depends on the severity

The way that we treat immunotherapy side effects depends on the severity. Patients receiving immunotherapy have likely already received chemotherapy, so they’re often able to cope better than they had expected with the mild side effects, like a cough, a rash or fatigue.

In the case of diarrhea, doctors focus on behavior changes first. An anti-diarrheal medication can cause life-threatening complications, so we first try diet modifications, such as limiting dairy. But if the side effect is severe, other medications may help. Patients who develop diabetes may require insulin or a period of time off the immunotherapy. The ultimate goal is to cut down on these medications as quickly as possible so the patient can resume immunotherapy.

Watch for changes in your body

Recognizing these side effects early is key to effective management of them. That’s why our experts advocate for self-awareness. Although a cough or a mild rash may not seem worrisome, it can be an early sign of something more serious. That’s why doctors maintain open communication with their patients so that every side effect experienced is shared quickly. It’s suggested that patients have a “better to be safe than sorry” attitude.

Side effects don’t indicate whether immunotherapy is working

The presence — or lack thereof — of a side effect doesn’t indicate that the drug is working or not. Patients are often so used to feeling sick while on treatment that if they feel OK, they sometimes think they’re taking a placebo or that it’s not working. It’s OK to feel well during immunotherapy.